A Different Kind of Street Intersection

A Different Kind of Street Intersection:
Brought to you by City Repair

It’s a street intersection like any of the millions in this country: two streets intersecting, houses on the four corners, usually two or four stop signs. But this one is different, very different. One corner, the one I’m sitting at now, has a tea house, a structure that houses a teapot, cups and tea. A post has been set into the cement at the corner holding a piece of driftwood that holds seven mugs. The driftwood also holds a small solar panel that creates a light seen through the Plexiglas roof at night. There’s a hot water thermos bolted to a table. This is where I made some tea this fabulous morning overlooking the intersection. “Where am I sitting?” you might ask, since it is rare for an intersection to have park benches, let alone chairs and tables. I’m sitting on a cob bench. Cob is made from a recipe of clay, straw, water and sand. When mixed together, it can be artistically sculpted into many wonderful things. This particular bench has a high arched back that has been sculpted with a young woman’s face, about twice the size of a normal face, and it can seat about 4 adults or 5-6 kids.

It is quiet right now, about 10:30 on a weekday morning. Right next to me are roses. I look across the street and see another cob bench whose arched back appears to be mountains and valleys with a Plexiglas covering to protect one from the many raining days in Oregon. Roses are also near that bench as well.

This is not private property. All of what I have described and will be describing is in the public strip, right near the street. Also in that same corner, among native plants and wildflowers, I see a birdbath and a bird swiftly bathing. Also in that same corner, about five feet away from the city’s fire hydrant, is a small sheltered structure that houses a neighborhood library. It has a glass case so you can view the contents without actually opening it. Some books are there with a sign on the side that says: “Welcome to the Book Station! Take a book, read a book, bring a book to share — try reading instead of homework. Teach a cat to read. The Share-It Square librarian never says ‘Shush’!” 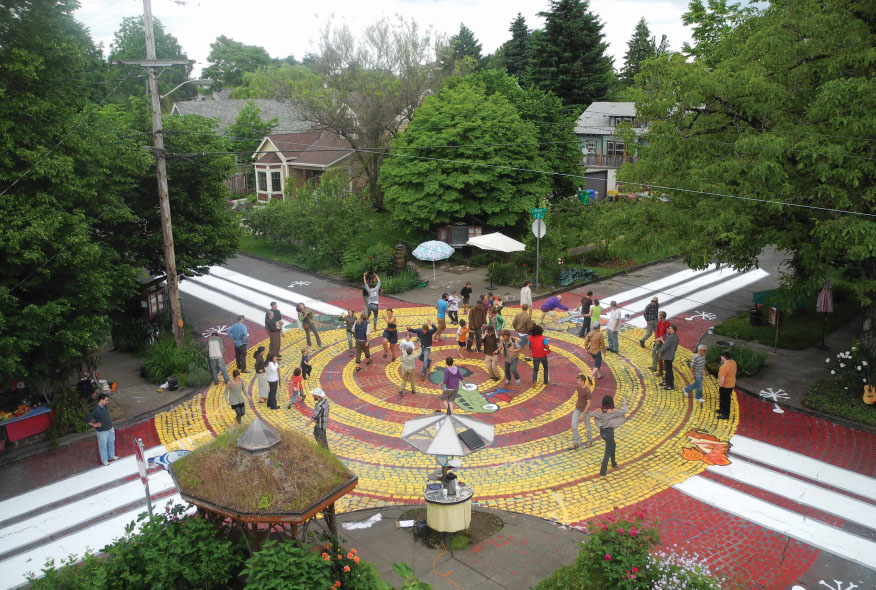 On one of the other corners of the intersection there’s another artistically designed structure with free things: clothes, books, fabric, shoes…, with a most colorful roof that appears to be in the shape of wings. As on the previously described corner, flowers and plants grow plentiful near the give-away structure. On this corner there is no house so I’m unsure of who owns the lot, but there is a large chalkboard for messages as well as two windowed cases for flyers, announcements of events and things for sale in the neighborhood, and a drawer underneath for colored chalk with a wonderfully printed wooden sign that says “Share-It Square Station.” (See, they have played on the name of the street: Sharrett St.). On the other side of the same corner is a cob honeycomb that sits about five feet tall. One neighborhood resident said that one day they hope to dispense honey for the tea drinkers across the street. As I look to my left, I see another kiosk on the fourth corner, with a plywood roof and glass cases, where a few lost cat signs are posted. Roses and other flowers bloom brilliantly on this sunny day. The corner also includes a cob structure with indented areas and a copper-like roof where plants grow, and a large structure of bamboo, recycled windows and a Plexiglas roof, with vines growing up the outside. This latter is a playroom for children; small tables, chairs, toys, books, magazines and games fill this space, which is about 15 by 7 feet.

What also is unusual about this intersection is that there are no stop signs. I didn’t know it was legal for intersections not to have at least one pair of stop signs. But what the neighbors did perhaps to calm the traffic is to paint the intersection with a colorful flower design and surround the image with cobblestone. Actually, when we first arrived for the Convergence we thought the cobblestone was for real. We could not believe when a neighbor told us that the cobblestone effect was created by sponges on a stick placing reddish- brown paint in a circular pattern. We were fooled. It was asphalt looking like cobblestone!

Since I’ve been here, from noon on a Tuesday, there have been about 20 cars. Most came to a near-stop before proceeding through the intersection. Bicyclists have come by, and neighbors walking their dogs. As I write this, a mom and her child sit on the curb eating their store-bought lunch. They did start off at the cob bench across from me, but I gather they liked the curb on the other corner to sit and enjoy their food.

This reminds me of a time when I was very young. After a wonderful night out sleeping in my tent with some friends in the back yard when I was about 10, we awoke early to walk around the neighborhood. Waking to the sunrise was exquisite and the simple walk around the very quiet and serene neighborhood was eerie. At one intersection, my friend and I sat on the curb to reminisce about the fun we’d had the night before. We weren’t there more than 15 minutes before a policeman drove up, got out and told us to move since it was illegal to sit on the curb. It was my first brush with the law and it certainly broke our youthful spell of walking around the neighborhood in a somewhat blissed state.

As I sit on this wonderful cob bench, writing about what I see…, I see beauty, I see art. I feel the neighborliness. I feel respect for this public space that has been dominated by the automobile. Whoever thought that this space would really be used as public space by its neighbors? I feel respect for the human being ready to allay our thirst with a variety of tasty and healthy teas, for the builders of benches for people to hang out and visit, for the creators of this whole space where friendly glances and spontaneous greetings can happen.

I also see the manifestations of a changed consciousness. I see community building with the use of renewable resources and simple structures, laid out for it to happen. Create a habitat and people will come. Create a shopping mall and people will come and consume and waste. Create a neighborhood where nothing is for sale and everything is free…, and something else will happen.

It is an invitation to discover we are not alone; we needn’t be subservient to a bottom-line developer’s design where alienation and seclusion thrive. This is where people can link together, can dialogue about the needs of their neighborhood as well as the larger community. I see it also as the beginning steps of creating villages of connectivity and positivity.

The mom and child have been exploring as I have, and when the little girl saw the playroom she exclaimed, “Wow, Mom, look!” I say, “Wow, world, look at the possibility in other neighborhoods. This is real. This is something we can taste, a design that can take the loneliness and the rush out of the system. This is the first taste of village life, a return to localization.”

When peering at the world’s major problems, like war, global warming and peak oil, doing something about them seems an awesome undertaking. For most of us it is burdensome, even unbearable. This report is an illustration of what some pioneers are creating all over Portland and in other cities throughout the country. I sense these pioneers have an intuitive grasp of what the future holds, if we have a future. But whether we have one or not, wouldn’t it be great to allow art and beauty and inspiration to draw us into the web of fun, solutions, and a sustainable future?

For more about these city repair intersections in Portland, Oregon, please go to cityrepair.org.
______________________
Bob Banner used to publish HopeDance in print but nowadays publishes material at www.hopedance.org, screens films, washes windows, rides his bike, plays ping pong without scoring (with two other fellows) and delves into deep and vulnerable conversations with the same fellows…

Local Family Gets Feet Wet at the Village Building Convergence

Building Her Own Earthship